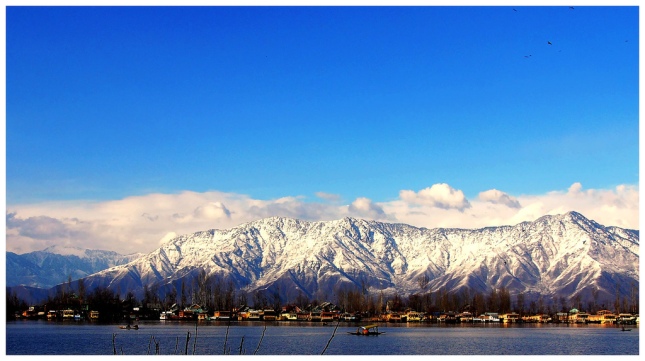 Tourist’s spots in Srinagar have always enchanted the visitors. Srinagar is amongst the most beautiful city in India. It also serves as the summer capital of the state Jammu and Kashmir. A very striking river named Jhelum flows through the Kashmir which intensify its beauty to make it a real heaven. Astounding Chinar trees and almond trees planted in a particular straight pattern in the city exaggerate its exquisiteness to the fullest.

Just a simple walk through the pretty riverside bank will make you realise the beauty of the Heaven on Earth.DalLake is also a very prominent feature of Kashmir. Main conspicuous attractions on the DalLake are Shikara, Houseboats and floating gardens and if you are courageous enough and love to go for adventure, you must go for skiing on DalLake in winters when it is frozen. There is nothing else in the world which can give you that much thrill. 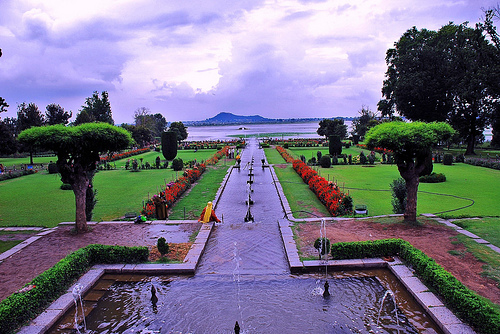 The city of Srinagar was ruled by the Hindus and Buddhists before it was taken over by Mughals.Mughal Gardens in Kashmir listed in world heritage sites by UNESCO world Heritage sites.

Mughals have designed mainly three gardens in the city which are rocking the tourism industry till today.All the three of the gardens are designed accurately like the Mughal architecture and are unconditionally beautiful which never fails to leave you fascinated. The three gardens named The Shalimar Bagh, The Nishat Bagh and The Chashm-e-shahi which means The Royal Spring are exceptionally gorgeous. These were built by Mughal Emperors Shah Jahan,who is also famous for incredible monument Taj Mahal and Jahangir on the pattern of Central Asia, Persia and Turkistan. 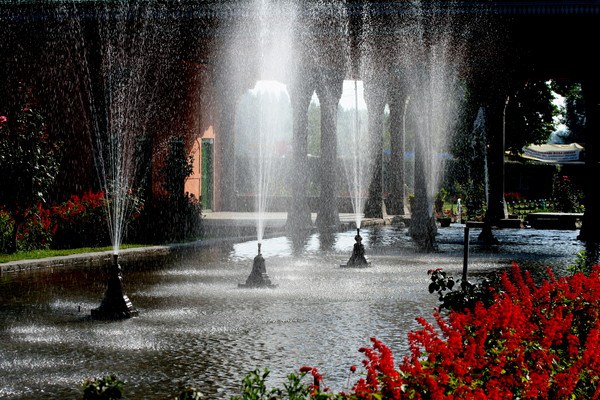 Terraced lawns, dazzling fountains, bright coloured long flower beds having stunning Dal Lake on the other side is not less beautiful than a dream. Shalimar Bagh was built by Emperor Shah which shows his love towards Kashmir. It was built for his wife. This beautiful garden has four terraces, each one on one above. The total area of garden is about 539 m by 182 m. In the middle of the garden runs a canal which is lined with polished shinning stones having running water. 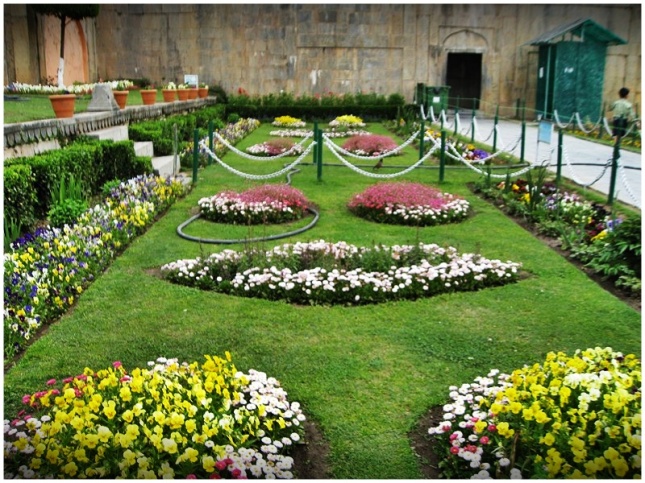 Nishat Bagh was built not by the emperor but by the empress Nur Jahan’s brother named Asaf khan in 1633 AD. This garden is the largest of all having seven terraces. Each terrace rises from the east of DalLake and appears not less than a mountain. With dramatically beautiful and vibrant flower beds and lush green gardens, this garden will never fail to impress visitors by its splendor. 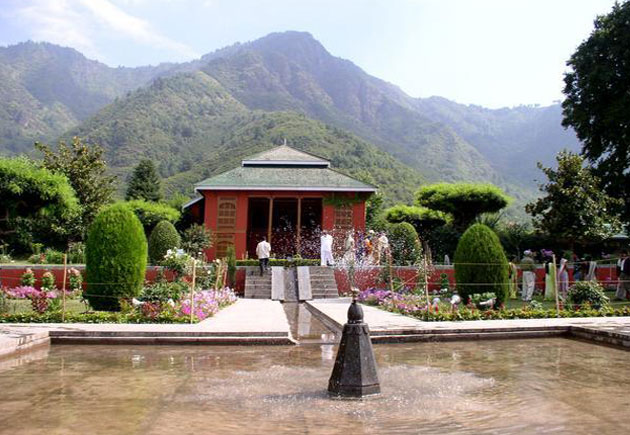 Chashm-e-shahi is the first Mughal Garden you will come across while visiting. It was designed by Emperor Shah Jahan in 1632 AD. It is built on a height which is above the main city. In area and size, it is the smallest Mughal garden. It has three terraces and a natural water spring which is covered by shinning stones pergola.

It’s not that only rivers and tress will lure your heart with their beauty. There are countless features which Kashmir has to attract thousands of tourists over the year.Kashmir was also one of the famous Mughal city in Mughal Era.There are some other tourist destinations of Kashmir which are very popular  among families, friends, kids and couples.

Incredible India! The perfect two simply describes the wide INDIAN beauty, its historic existence for future and its wide heritage and culture. India is a land of many carnivals. Starting with the Crown of India, Jammu and Kashmir, till the bottom end, Kanya-kumari, one can see many religions and culture on every 100mile journey. 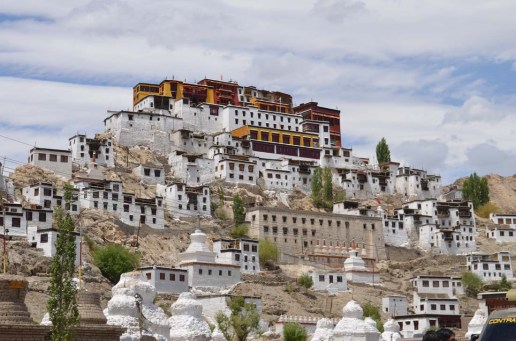 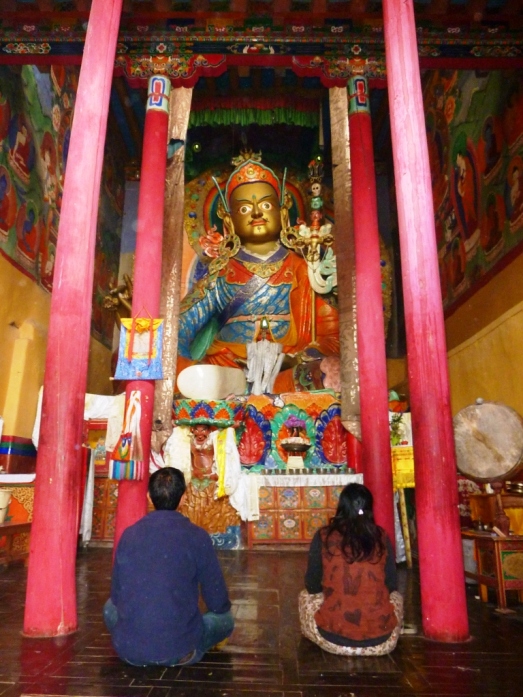 Hemis Monastery is a world heritage site of India founded by first incarnation of Stagsang Raspa Nawang Gyatso in 1630 AD. Monastery was re-established in 1672 AD by King Sengge Namgyal.

The Pupil of Yogi Tilopa (Naropa) and teacher of translator Marpa are allied with this monastery. Hemis is honoured as the largest monastic institution in North India. Monastery is wealthiest and the hoariest ancient remark of Leh. It is located on the west banks of Indus River, near Karu. 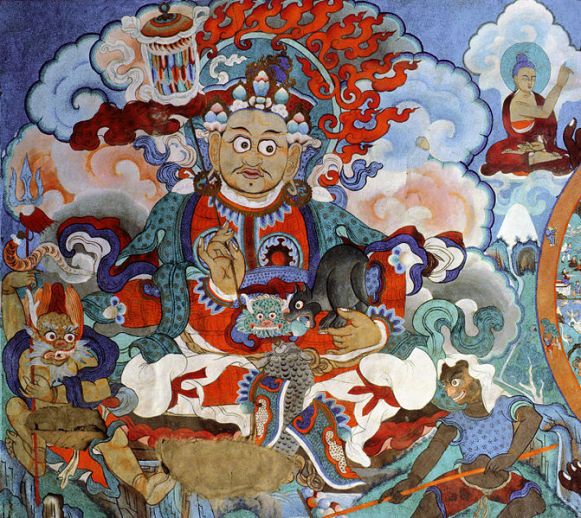 Hemis is a point of attraction for the tourist not only because of its location, but for the colourful festival of monastery held in June- July. Monastery is well known for the rich collection of ancient fragments made of gold, silver and copper, scared Thangkas, murals and various artifacts.

Monastery belongs to the Drukpa Lineage. It is like an institution where the tantric vajrayana are taught in several sects like Kargyu, Sakya, Gelug. Even monks of monastery perform Tantric Worship. 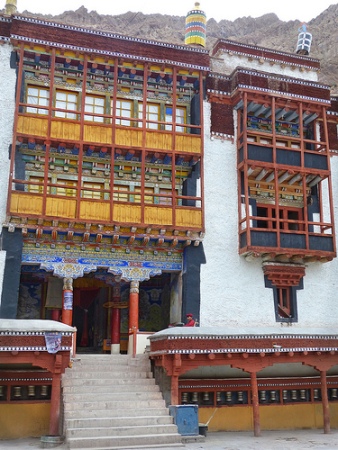 Dukhang, Main Face of Monastery (Image by Peteshep on Flickr)

Just like the way to monastery is thrilling and striking in itself, the same way monastery welcomes you in its beautiful, colourful and attractive Tibetan style architecture. It is separated into two segments – Dukhang, the assembly hall and Tshogkhang, the Temple. The huge Courtyard is ornamented with unique patterns and gorgeous designs. Highlights are the colourful wall paintings of Buddhist Kalchakra and lords of four quarters.  Courtyard is the place held for all celebrations and public functions. 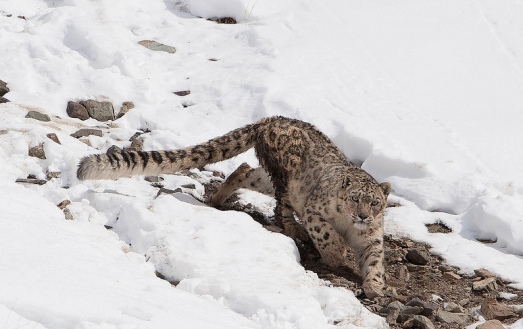 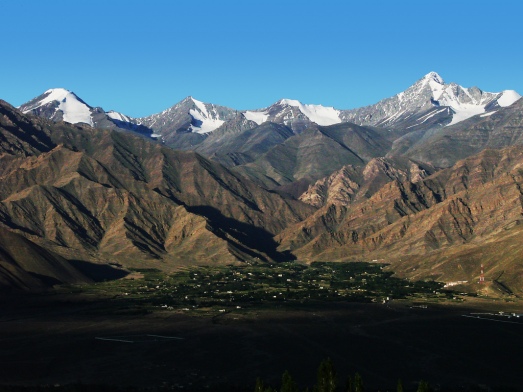 One more destination of Hemis famed between the tourists is its National Park. Close to the monastery, there is the High Altitude Park which is known worldwide for its rare animal, snow leopard. 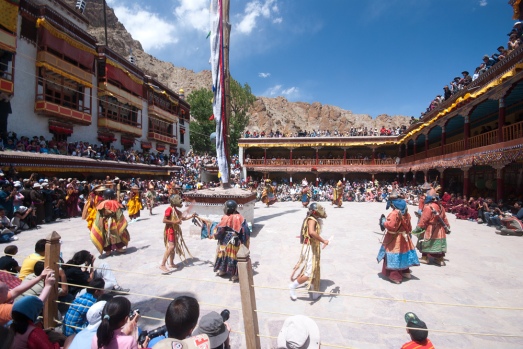 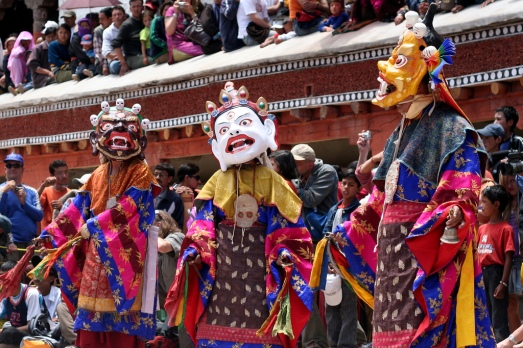 Another most important part of the Hemis is its Festival. Festival is celebrated on the tenth day of the Tibetan lunar month every 12th Year. Festival is celebrated in restoration of birth anniversary of Guru Rinpoche, the initiator of Tantric Buddhism in Tibet. It is assumed that life mission of Guru Rinpoche was, and is, to improve the spiritual condition of all living beings. Festival is completed dedicated in memory of the Guru. The scared rituals performed are alleged to give spirituals strength and good health. Dance and drama for mission and life are performed wearing colourful masks and dresses accompanied with traditional music. It’s a three day festival, which attracts a lot of tourists from all around the world.

Festival begins with the early morning rituals. For the fest Lamas gather in the monastery and execute plays and dance. Highlights of the fest are the mystic mask dances, which are also known as Chams Performance.

Hemis is a remarkably a destination with many ancients things, which are surrounded by nature and which leaves a memorable journey impressions.