Taj Mahal is such a popular monument that almost everyone in the world knows about it. It is located in the Agra city of Uttar Pradesh, India and is a major tourist destination. It is one of the Seven Wonders of the World and an iconic structure of India. Due to its beautiful architecture, it is listed in the UNESCO World Heritage Site. Its beauty is unmatched and has never been surpassed by any other building. This timeless monument was built by the Mughal ruler Shah Jahan in the memory of his beloved life Mumtaz Mahal. It is made-up entirely of white marble. Its dazzling architectural beauty is beyond adequate description, particularly at dawn and dusk. It glows more in the light of the full moon and in the foggy morning, it looks pure white structure, which is placed among the clouds.

This monument is referred as “elegy in marble”. It is a mausoleum that houses the grave of his beloved queen Mumtaz Mahal. Later, the grave of Shah Jahan was added up to it. This marvel of India took twenty-two years to complete its construction with the help of twenty thousand workers. More than 1,000 elephants were employed in transportation of the construction material. In 1648 C.E. the whole structure completed perfectly. Total cost of 32 Million rupees was used for the construction purpose. The master architect of the mausoleum was Ustad Isa. He was the renowned architect of his time. Expert craftsmen from several places of India like Delhi, Qannauj, Lahore and Multan were employed. Also, renowned Muslim craftsmen from Baghdad, Shiraz and Bukhara worked on specialized tasks to build it perfectly.

The monument stands on a raised and a square platform with its four corners truncated that forms an unequal octagon. The architectural design uses the interlocking arabesque concept in which the each element erects on its own and integrates perfectly with the main structure. Its central dome is 58 feet in diameter and 213 feet in height. It is encompassed by four subsidiary domed chambers. The four graceful, slender minarets outside the main chamber are about 162.5 feet high. The entire mausoleum is decorated with veneer design of flowers and calligraphy using precious gems namely agate and jasper. Main archways are chiseled with passages from the holy Quran and the engrossing work of flowery pattern that captivate charm to its beauty.

The Taj Mahal complex is vast and full of several other palatial buildings like mosques, garden, gateway, reflecting pool, etc. Behind the complex, there is the Yamuna River that reflects the beauty of this marvelous wonder throughout the day. Many replicas are modeled on the Taj Mahal like the Taj Mahal of Bangladesh, Bibi Ka Maqbara in Maharashtra, Trump Taj Mahal in Atlantic City and the Tripoli Shrine Temple in Milwaukee, Wisconsin. But, none of them were able to get even close to the beauty of Taj Mahal. 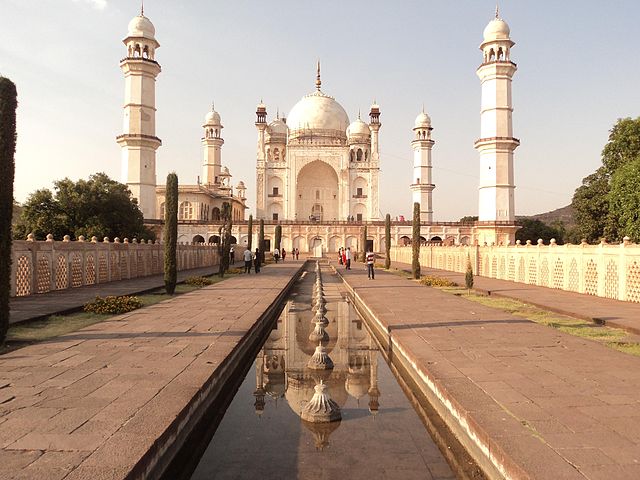 Bibi ka Maqbara in Maharashtra
It was created by Azam Shah, son of Aurangzeb and grandson of Shah Jahan, to rival the beauty of Taj Mahal

Thus, the Taj Mahal is the jewel of mixed Indian and Muslim art and architecture as it combines the elements of both Persian and Indian architectural elements. A large number of visitors choose the Taj Mahal tour only to see this white marvel. Some tourists across the globe come to India only to visit this elegy in marble. So, a curiosity to visit this marvel of India only makes the Golden Triangle tour popular in India.