The impression of mughal heritage can be seen in the form of the great monuments in north India. Cities like Agra in Uttar Pradesh and Delhi are two such examples of it. While Agra boasts the grandest of grand monuments, the Taj Mahal, Delhi also has many tombs and monument that are worth visiting. Humayun’s Tomb is one such attraction of Delhi that is listed as a UNESCO World Heritage Site and glorifies the mughal architectural style.

Humayun was the second emperor of the mughal empire in the Indian subcontinent. Humayun died in 1556 and his first wife, Bega Begum, commissioned his tomb. She hired a Persian architect named Mirak Mirza Ghiyas as the chief architect for Humayun’s Tomb. The architecture and design of this tomb were unique for that time. It was the first tomb in the Indian subcontinent with a garden, and also the first grand monument made up of red sandstone. The excessive use of red sandstone is one of its prime features. The tomb follows the early mughal architecture that was mostly influenced by Islamic style but also included few Indian designing elements. 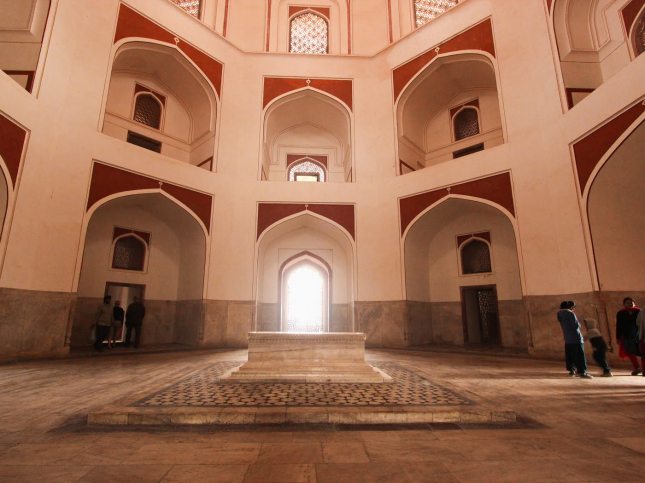 Inside the main chamber, there is a cenotaph of Humayun’s Tomb while the original grave lies in the basement below it. There are many symbolic elements inside the main chamber like a mihrab design over a marble lattice or jaali that is facing Mecca in the West. Also, there are four main octagonal chambers on two floors. Some of the smaller chambers contain cenotaphs of other mughal family members like Bega Begum, Hamida Begum (wife of Humayun and mother of Akbar), and Dara Shikoh (Humayun’s great-great grandson).

There are many big and small monuments around Humayun’s Tomb. Char Bagh (literally four gardens) is a Persian-style four layouts garden, which are subdivided into smaller squares with pathways. Another prominent attraction is the Babar’s Tomb. It is a tomb of the royal barber and is also called Nai-ka-Gumbad. Then, there is Tomb and mosque of Isa Khan that was built before the Humayun’s Tomb. Other smaller buildings include Bu Halima’s Tomb, Afsarwala Tomb and Nila Gumbad. Humayun’s Tomb and many other buildings have gone under restoration to preserve them for the future generations to see.